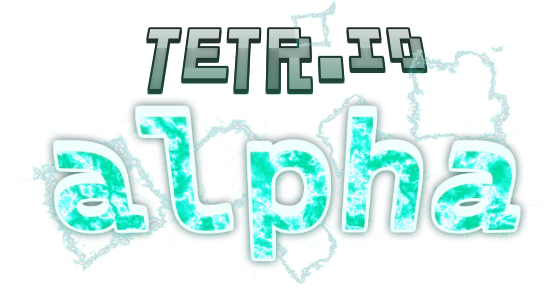 TETR.IO has reached the ALPHA development stage, and is now accessible to everyone! After almost two months of INFDEV with a team of testers I cannot be more thankful of, I am now able to unveil TETR.IO to the entire world!

There are now many multiplayer tweaks that can be applied, from hold on/off to garbage travel speed, to custom DAS!

Chat is complete, and a swear word filter has been implemented!

TETR.IO now displays detailed info about a player whenever you wish to view their profiles!

You can now easily create accounts and, if you have set an email, even recover their passwords!

I wasn't planning to implement this as early as now, but EXP is available now, so you can progress as you develop your skills!

All the effects and tweaks I'd like to implement by Alpha have been implemented, with hopefully more polish coming soon!

We're only in Alpha stage right now, so there's still a lot to be done. However, I do have plans for many cool things to come.

Right now, Quick Play is just one big room. This is great and all, but as soon as one pro joins, others will have to make way. I hope to be able to add 1v1 matchmaking as soon as possible, once the userbase is large enough to support such a feature.

The only online mode right now is ELIMINATION. This is the de facto online mode in most stackers, but I'd like to also implement TIMED and RACE modes.

It's impossible to spectate a match that's already begun right now. I'd like to make it possible to do so - it just requires a bit of headache code-wise.

Of course, I'd like to add more single-player fun too - above all, a ZEN mode that can be played inbetween matches as well, and a longer MARATHON-esque mode.

And, of course, I still want to look into making performance as smooth as possible on as many devices as possible.

For the most part, the 44-FACT-FRENZY still holds up. While I do not know in which order I will tackle everything, I hope to be able to, together with your support, make TETR.IO something we can all enjoy!

I want to extend my gratitude and thankfulness to everyone who helped test the INFDEV builds. Without your extensive support, I would not have been able to make TETR.IO what it is today. Going Alpha, however, doesn't mean I'll stop developing and fixing bugs. I hope all of you, and all newcomers, will help us make TETR.IO ever better!

With the launch of Alpha, I'd like to also announce I now have a Patreon! This will hopefully help pay the servers, and be another way to support TETR.IO. Depending on the tier you choose, you can get pretty cool rewards, including an ingame badge and a permanent position in the game's About page! I would be incredibly grateful if you checked it out here: TETR.IO Patreon

Furthermore, I'd also like to remind everyone reading to join the TETR.IO Discord! This is the #1 place to get updates and changelogs as they roll in: TETR.IO Discord

Finally, I'd like to thank the Hard Drop community for helping me develop the game, giving feedback and reporting bugs. If you haven't yet, check out Hard Drop now!

Thank you very much for reading, and have fun!

I'm almost Lvl 50, yet I don't play that often, and don't win much. I think you should lower how fast you lvl up.

I also think that it would be really cool if there were different skins you could use, and different sound effects.

ok that's cool and all but can you whitelist

No need to anymore~

Do you think you'll ever release it as open-source?

Any plans for Nintendo 3DS?

Any update on this? Would love to hit a t-spin while playing brain age

thanks, osk i wanna take a match with you :)

Is there a client/non-web page version planned?

Any plans for mobile?